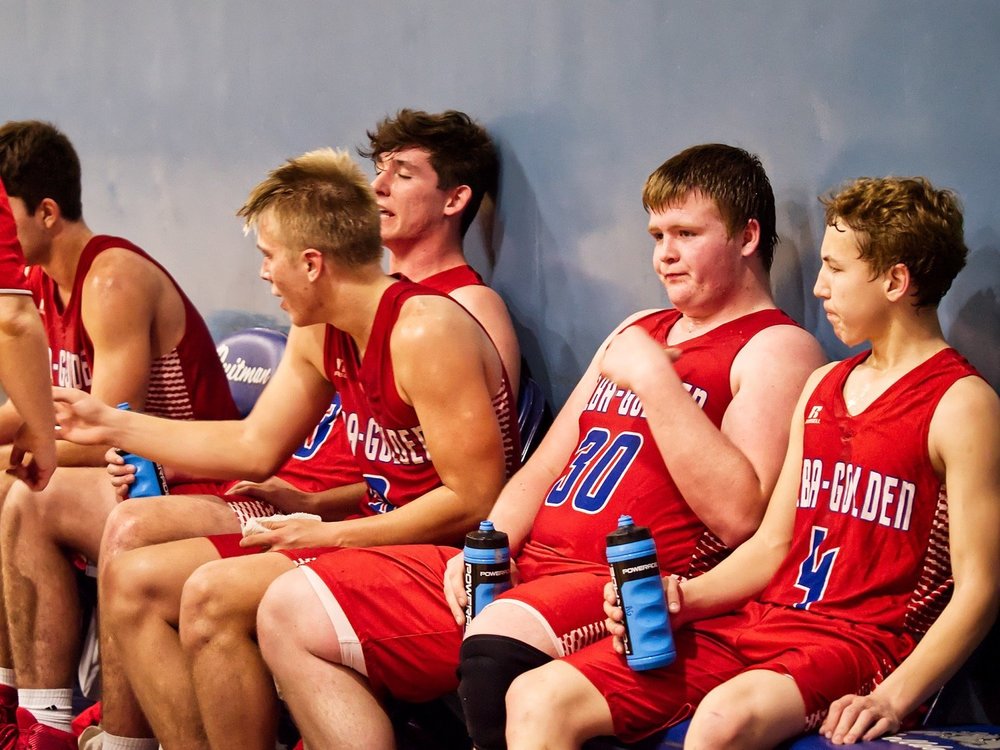 Alba-Golden sprinted out of the gate and Quitman could never catch up in last Tuesday’s contest between Wood County rivals. The Panthers won the game 50-34, but not until after all the smoke cleared. Both teams are expected to make a run for a playoff spot, and the packed house at Ballard Memorial Gym was treated to an explosive game.

It was a physical effort on both squads and things would get rough sooner than later. Alba-Golden raced to a 14-1 lead while limiting Quitman to one free throw in the first quarter. The Panthers picked up where they left off going up by as much as 19-3 at the beginning of the second quarter. Panther Coach Craig Philo had his team employ a stingy 1-3-1 zone Quitman found difficult to score against.

With just over five minutes to go until halftime, an altercation broke out under the bucket on the Quitman end of the court. The Panthers were trying to score and Quitman was defending. Coaches and officials stepped in immediately, and there were players from both sides involved in trying to stop the fracas.

When order was restored, four Alba-Golden players were ejected and sent to the locker room for leaving the bench. None of those ejected players threw a punch, but UIL rules say players are not to leave the bench during an altercation. According to the rules an ejected player misses the rest of the game from which they were ejected and all of the following game.

When play was resumed, the Bulldogs took advantage for the rest of the quarter to move within 23-16. After intermission, it was the Panthers who came out fired up. Backed and encouraged by a loud and vocal fan section, Alba-Golden players Hayden Weissert, Boedy Baker, Will Hartin, Jacob Dailey and Tim Mitchell became Panther heroes. Those five played the rest of the two and a half quarters without substitutes.

The Panthers came out firing in the second half. Weissert had an excellent game hitting shots from all over the court and playing tough defense at the top of the 1-3-1 zone. Baker and Dailey were dominating inside rebounding and getting second and third chances under the basket. Will Hartin came in and did a fine job directing the team from out front, and Mitchell helped out handling the ball and rebounding under the bucket.

Quitman just could not get the offense untracked, and the Bulldogs were well under their usual scoring output. Quitman was able to score just seven third quarter points and went into the final quarter down 37-24.

Quitman was unable to stage a comeback in the final quarter, and Weissert continued with the hot hand for Alba-Golden. Baker, known for his tough running and linebacker duties in football, showed he has plenty of basketball talent too. Weissert, a sophomore, hit for 20 points while Baker added 12 more and Dailey put up seven. Jon Michael Chadwick added six points, Hartin three and Mitchell two.

After hosting Edgewood Tuesday, the Panthers travel to Emory to take on Rains Friday. Quitman played at Lone Oak Tuesday and has a bye Friday.

This article may be found, as originally published, at Wood County Monitor online.