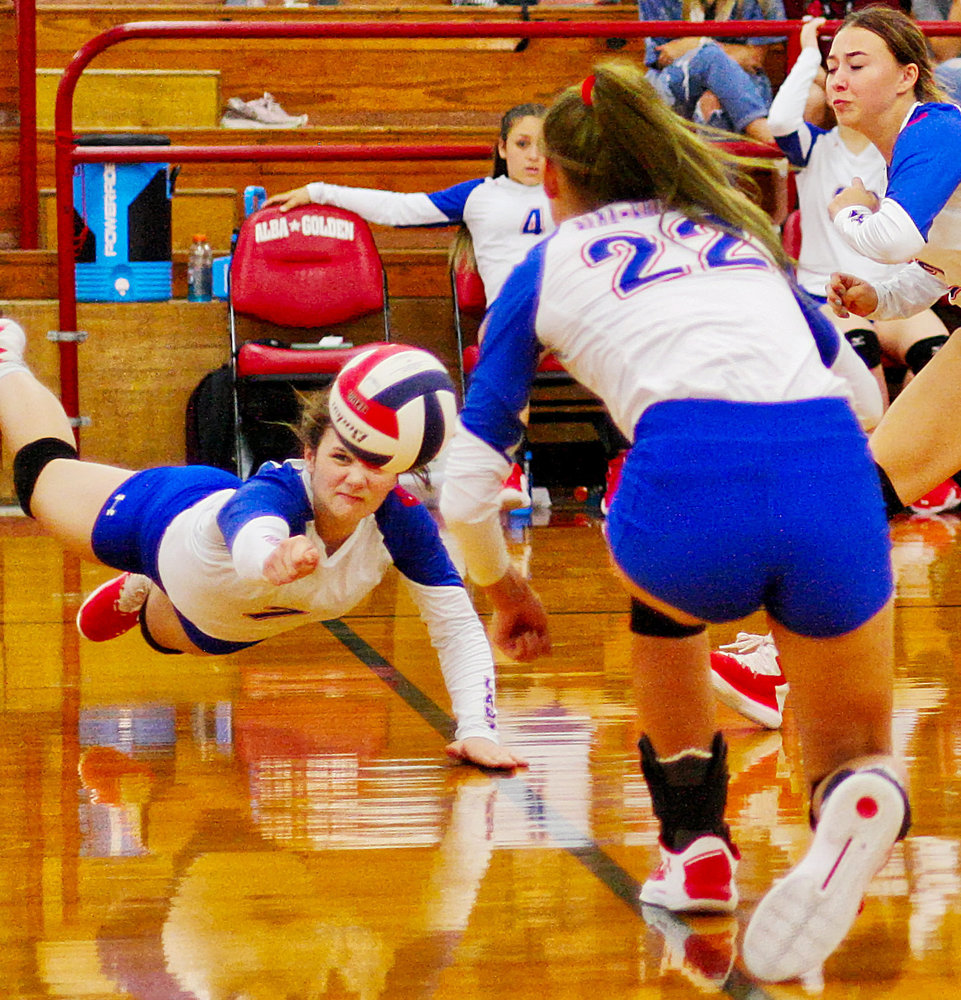 The look of relief on the face of Alba-Golden Head Volleyball Coach Jamie Webster was evident from across the gym. The Lady Panthers had just secured their first district win, a 3-1 match win against Lone Oak last Friday.

“Our focus has been on consistency, with everyone contributing,” she stated.  The Lady Panthers got just that in the Lone Oak match. The squad produced winning-play contributions from everyone on the court. “It will take all 12 of us to win,” affirmed Webster.

The Lady Buffaloes took game one 25-23 in a very tightly-fought game. With the score tied at 10, Alba-Golden opened a four point advantage behind a Laynie Culp kill shot, an ace from Autumn Whitten, and two blocks at the net by Crimson Bryant.

A rash of mis-hit errors allowed the lead to slip away. The Lady Panthers trailed 18-22, before a Whitten kill stopped the slide. Despite an ace by Ann Marie Pendergrass and a beautiful drop shot by Bralee Littlejohn, Alba-Golden saw game one go to Lone Oak on a net violation.

The first significant change in Alba-Golden’s play was no let down in performance after having lost a game. They played the whole night with a “we are having fun” intensity.

Although tied once at 11, the Lady Panthers held the edge throughout game two. Madi Bryant opened the lead to 17-14 with a kill. A Culp service ace started a four-point rally. Alba-Golden prevailed 25-19.

Game three was the best of the night. Overcoming a number of defensive misplays in the early going, the Lady Panthers righted the ship. The game became a point-for-point affair, with six ties.

Whitten and Kalli Wright were very active in game three. Kayli Covey played her best match of the year, with great movement around the court. Pendergrass produced three service aces in the end stages to boost the Lady Panthers to a 25-22 win.

Nerves almost got the best of the Lady Panthers in the final game. Up 24-17, they gave up six consecutive points before emerging with the 25-23 win. Several points off of blocks by Crimson and Madi Bryant, and the on-court leadership of Hope Wiley highlighted the match-deciding game.

An ecstatic and relieved Coach Webster enthusiastically offered, “We will build on this!”