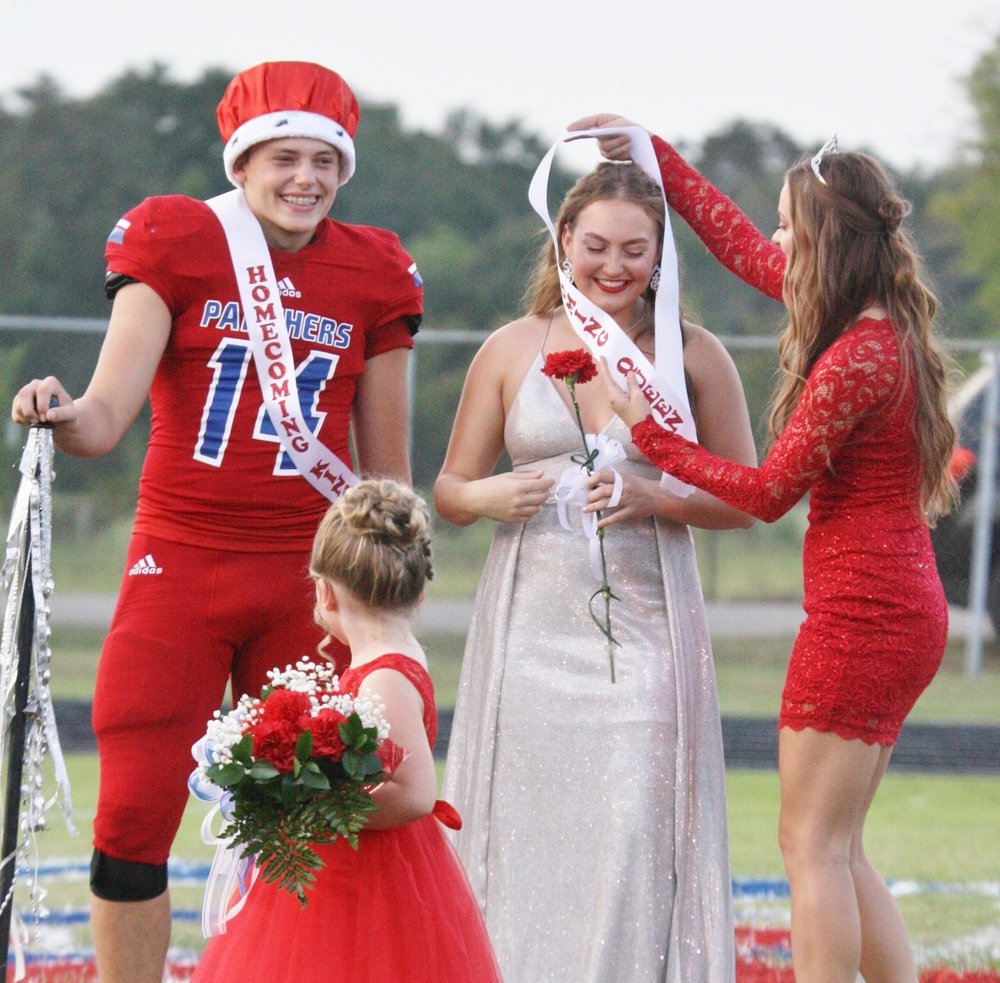 The first half of Alba-Golden’s homecoming game against the Honey Grove Warriors was a classic defensive struggle. The teams went to the break with the Warriors leading 8-0. The second half became a torrent of Honey Grove offensive production, and the Panthers suffered a 36-0 loss.

Alba-Golden’s Jon-Michael Chadwick derailed the initial Warriors’ drive with an excellently-timed interception over the middle. The Alba-Golden linebacker corps of Boedy Baker, Michael Gaskill and Shawn Gaskill was active in the early going, with Shawn Gaskill making a stop for loss on the first Warrior drive.

The Panthers could not capitalize on the turnover. Despite holding the ball for 11 plays, the home side was forced to punt.

Alba-Golden never got the offense untracked. They could not sustain offensive momentum. In eight possessions, the Panthers punted five times, turned the ball over on downs once, and lost one fumble.

The first quarter expired with Honey Grove on the move. A nine-play drive ended with a turnover on downs following a strong stop by the Gaskill brothers.

Alba-Golden managed to move into Warriors’ territory but the drive stalled at the visitors’ 40-yard line.  Honey Grove took over on downs.

A first-down pitch around left end went for a 59-yard scoring run. The visitors executed some nice deception on the two-point conversion and took an 8-0 lead.

Honey Grove retained the momentum by recovering an onside kick and driving the ball down to the Panthers’ 14-yard line. On a fourth-and-6, Baker tackled the Warriors’ quarterback short of the first down on a roll-out and the Panthers took over.  Baker demonstrated his defensive quickness by making the play on the sideline from his middle linebacker position.

The Panthers rallied for their best offensive series of the night. They moved 63 yards down to the Warriors’ 25-yard line.  A 29-yard strike from quarterback Blake Weissert to Hayden Weissert highlighted the drive. Hard running by Chadwick, Austin and Glen Hartley kept the Panthers moving. A third down fumble from the 25 killed the drive.

At the break the crowd was yearning for more. A defensive struggle between two evenly-matched teams would surely play into the Panthers’ favor. It was not to be.

Both teams emerged for the second half energized. Alba-Golden was stopped cold on their initial possession and turned the ball over at mid-field.  The Warriors took over and communicated their intent for the rest of the night. Back-to-back sweep plays produced two first downs.  A penalty set the Warriors back, but a 40-yard scoring jaunt down the left side made the score 14-0.  A swinging-door two point conversion was successful.

The Warriors continued to attack the edges of the Alba-Golden defense for the rest of the night. Fatigue set in, and cracks began to show in the Panthers’ defense. Up front, Honey Grove began to dominate.

A run of 46 yards set up a one-yard plunge to increase the margin to 22-0. After the turn of the quarter, a 76-yard gallop went for another score. With two minutes remaining in the game, the Warriors produced an 82-yard scoring run which included two broken tackles.

It became apparent that with so many athletes playing both offense and defense, one of the keys to Alba-Golden’s season will be ball control. The Panthers were still plagued with ball security at the exchange, and with one exception, could never establish the consistency required to leverage their solid running attack.

A pleasant surprise to the contest was the performance of Glen Hartley, who had several aggressive runs and kick returns. His energy sparked the team.

Much is expected of the 2019 Alba-Golden Panthers. The early season revealed a team with a well-balanced running attack and an aggressive, smart, defense. They have two weeks to correct the ball security issues and shore-up the defensive edges. Both measures are doable before their district opener Sept. 27 against Harmony.

Harmony was the pre-season district favorite, but the Eagles are winless at 0-3 so far this year.